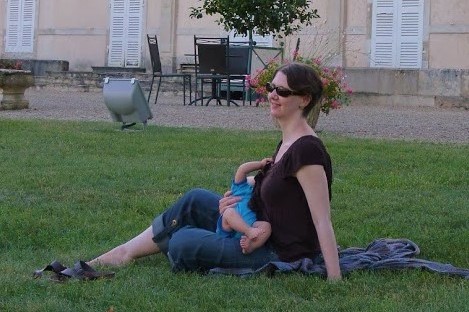 Our son was born early – not the kind of early, thankfully, that means heartrending weeks of incubators, monitoring and uncertainty –  but early enough that our breastfeeding relationship got off to an extremely rocky start.

I’d always planned to breastfeed, but while antenatal classes had prepared me and my partner well for the birth, other than some vague understanding that breastfeeding is harder at first, but easier and better for mother and baby in the long run, when our son was born I understood very little about the practicalities of mastering this tricky and elusive skill.

After a rocky few weeks where I expressed milk to bottle feed our son, he eventually latched for the first time after 5 weeks, by 10 weeks we established a comfortable and reliable breastfeeding relationship and we continued to breastfeed daily until he eventually lost interest, nearly two and a half years later.

This final transition, it has to be said, has been harder for me than for him. He hasn’t looked back, whilst I still yearn for those moments of calm, snuggly intimacy with my, now increasingly independent, little boy. It felt like the right opportunity, however, to look back and reflect a little on what I had learnt.

The importance of the first hour

Save the Children estimates that 22% of newborn deaths worldwide could be prevented if breastfeeding is started in the first hour after birth. This is partially because mothers’ first milk – colostrum – is so rich in antibodies and immune system boosting cells, but also because successful early initiation of breastfeeding makes it much more likely that mothers will still be breastfeeding exclusively at six months.

Most mothers will now have seen the incredible videos of newborns finding their own way to their first feed shortly after birth. Unfortunately, when our son was born, I hadn’t. As a result, not feeling confident to hold my son whilst being stitched, I handed my son over to my husband for the hour after birth. It’s hard to know whether and how much this contributed to our subsequent struggle to get breastfeeding established – premature babies, due to their size, can have more problems latching and my son just wouldn’t open his mouth when he approached the breast. Nevertheless, if and when we have another baby, I will be sure to:

The value of breastfeeding support

After receiving surprisingly little breastfeeding support on the post-natal ward of the major teaching hospital where I gave birth, I was relieved to be able to access (time and again) the advice and support of trained lactation consultants through the La Leche League and local Baby Cafes.

Here I learned about the benefits of extended skin-to-skin contact, laid back breastfeeding (aka ‘Biological Nurturing‘) and ‘kangaroo care’ (skin-to-skin in a sling) as mechanisms to encourage my son to latch. I was lent a double pump to facilitate my intensive every-3-hours-24-hours-a-day expressing routine and was encouraged to try feeding my son in a warm bath (after weeks of doing all these things, the bath was finally where we got our first latch).

I also found a community of other new mums and volunteers who were able to laugh and cry about premature let-down, leakage, cracked nipples and knitted boobs – a blessed relief during an emotional time. Without this support – and that of my husband – it’s highly unlikely I would have persevered with our battle to get breastfeeding established for as long as I did.

I will certainly take advantage of community-based support of this kind if and when we have another child. The amazing KellyMom website was also a great source of reliable, evidence-based information for any remaining questions.

The importance of flexibility

In my two and a half years of breastfeeding, wherever we happened to be, I encountered nothing but support from the people I met. How ironic then that, aged 8 months, with a growing awareness of the world around him, it was my son who decided to completely stop breastfeeding when out and about. Breastfeeding was just too boring, the world around him was just too exciting, to take 10 minutes out for a feed. I was left with a choice – his feeding strike only happened when we were out of the house, at home he would still feed multiple times a day – I could stay at home and feed, or carry on with our social engagements and find a work-around.

Fearing we would both go mad, I went with the latter option and spent the 6 weeks his strike lasted providing water and copious amounts of fruit, eggy bread and other finger foods to stave off his hunger until we got home for a feed. He was quite happy with this solution and, barring a little engorgement, so was I. Looking back, it would have been easy to transition away from breastfeeding at this point, but I had a hunch that it was just a phase. Once he got through it he went back to feeding out and about as before.

Another time, when suffering with a particularly nasty cold aged 20 months, my son rejected anything but breastmilk for days on end. I was amazed by how quickly my milk supply – which had been declining since we started introducing solid foods at 6 months – kicked back up to peak levels to give him the fluid and nutrients his body needed. The ability to literally nurse my son through his discomfort and back to health was both reassuring and empowering. Indeed, research suggests that the immune factors in breastmilk increase in concentration in the second year and during weaning.

Finally, after my son turned two, I undertook two, week long work trips during which I didn’t pump or express at all. Both times, my son returned to nursing on my return without missing a beat.

All this has left me rather in awe of the flexibility and stability of a well-established milk supply. If we have another child I will know to trust both my baby and my milk supply to adapt to changing circumstances.

The value of connection

I returned to work part-time when my son was one. Having diligently expressed and frozen a supply of milk for him to have during the days I was out of the house, it was slightly frustrating to find that he had no interest in having my milk from a cup. By this point, however, he was already eating a wide range of solids and drinking lots of water, so we fell into a routine of breastfeeding morning and evening on my working days.

While I know many mums who want to wean before returning to work, for us the ability to reconnect through breastfeeding at the end of the day, or after a few days away, made the separation easier for us both.

While the nutritional benefits are most often talked about, in the end it was this emotional connection that has meant the most. It has left a legacy that I hope will continue for many years to come – at the end of every day, my son and I still take time to sit quietly with each other and reconnect before bed.